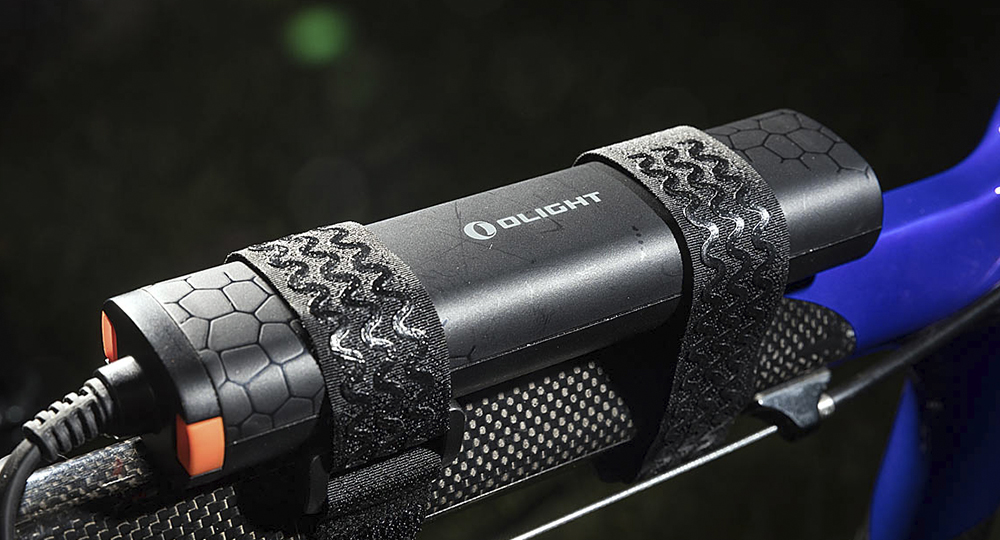 The RN3500 front light is compact and uses a separate, fairly large, battery pack that straps to the bike’s top tube or down tube. The light unit is 6cm x 4.4cm x 4.2cm, including the mounting foot. It comes with a separate handlebar mount, along with five different length silicone straps for attaching the mount to a range of handlebar diameters, including one for aero bars. Once in place on the bars, a hex nut on the front is used (Olight provide a hex key) to tighten the mount in place. I found my bars fell between the size 2 and size 3 lengths, but there’s a little rubber pad to slide under the mount, and this provided the correct padding to get a firm fit.

Once the Garmin-type mount is in place on the bars, the light unit attaches by a 90-degree twist to lock it on. The silicone straps can also be used to attach the mount to a helmet.

The light housing has a 54cm rubberised lead, ending in a jack plug, which has to be inserted into the corresponding lead from the battery.

The housing itself has five white LEDs, in an array with three at the top and two lower ones.

The battery pack is fairly sizeable – 16.7cm x 4.2cm x 2.8cm – and contains a 5,200mAh lithium ion rechargeable pack. Charging is via a micro-USB port in one end, under a rubberised seal. This also has a charge-check button to indicate its present charge status. A full charge from empty takes about nine hours.

At the other end of the battery pack is a detachable output lead, 42cm long with a female jack socket into which plugs the light unit jack.